Problem with bidirectional paths is making left turns across the traffic. For North-South Cycle Superhighway TfL proposed a small waiting area with protective island (see illustration from Consultation document). They built one island and found cars going wrong way round it, so removed the island. So left turns waiting bays now have only white paint (see photos at http://healthyrider.weebly.com/miscellaneous.html). Very intimidating when traffic is heading towards you from the opposite motor traffic lane!
I understand TfL is "working on a solution". But does anyone have ideas we could feed to TfL. Does anyone know of an example where an "offside" left turn has been well engineered? 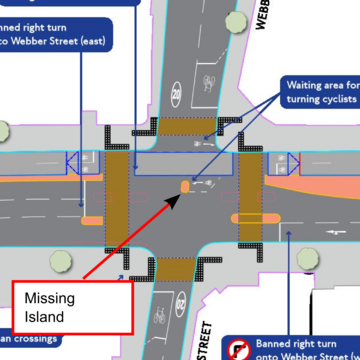